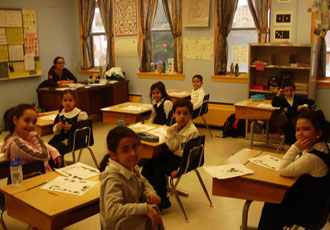 Wishing to open a French institution for a predominantly Arabic and Muslim workforce that resides primarily in the western part of Montreal, the charitable Islamic Foundation Alkhoee – which is a non-profit organization, bought in 1992, two buildings located corner Jean Talon with Côte des Neiges. One of these two buildings was intended for management of classrooms, and one for the construction of a gymnasium.

In August 2002, the foundation received a permit, valid for one year, allowing it to provide services for preschool and primary education services whose classes should be implemented gradually. The foundation expected to receive 25 children aged 5, and 50 students of 1st and 2nd grade. Unfortunately, it could not begin operations until early September 2003 because of incompleted the construction of the building.

Between 2003 and 2006, it reached its objectives, all classes from kindergarten to primary level of the 6th year, were in operation. In 2006, the Foundation opened on the same site a DAYCARE for children 3 and 4 years old. It plays the role of nursery to primary school. In 2007-2008, on a recommendation from the management of private education, the school is legally separated from the parent foundation in the form of autonomous corporation with a board of its own administration. In the same year, the new corporation submitted an application to obtain:

– The license amendment for the addition of teaching in general secondary education services, limited to 1 cycle classes,
– Change the name of the school from Al-Houda primary school  to Al-Houda School.

In September 2009, the school opened the first high school class. Since 2011, the school is part of Al-Houda Federation of private educational institutions in Quebec.